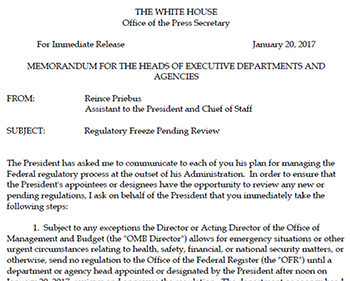 On February 14, 2017, CPDA wrote to then-EPA Acting Administrator Catherine R. McCabe requesting that pesticide registration actions under PRIA be exempt from the regulatory freeze established under a January 20, 2017 White House memorandum mandating a temporary hold on all new or pending regulations so as to allow the Administration sufficient time to review these rule for questions of “fact, law and policy.”  The memorandum, issued by Reince Priebus who serves as President Trump’s Assistant and Chief of Staff, sets forth a Presidential directive prohibiting all federal agencies from sending any regulation to the Office of the Federal Register (OFR) for publication until a department or agency head appointed by the President reviews and approves the rule.  Rules that have been sent to the OFR but have not yet been published in the Federal Register must be immediately withdrawn pending review by the Administration.  Until such time as the restrictions detailed in the so-called “Freeze Memorandum” are lifted, EPA submission of final rulemakings to the OFR for publication of products approved under PRIA are on hold.  The memorandum does include the opportunity for an affected entity to request an exemption to the prohibition on sending a rule to the OFR and/or the necessary rescinding of a submitted but unpublished rule with specific reasoning.

The mandate of the Priebus memorandum has resulted in a round of negotiated due dates under PRIA for those applications currently in the pipeline as well as those awaiting the last step of publication in the Federal Register.  CPDA has learned that many member and non-member companies have received requests from the Agency for renegotiated due dates of current PRIA actions.  It is unclear whether submissions made now or since January 20th will be time-stamped for submission or whether an applicant will be notified of receipt of submission. Exacerbating this situation are reports that the Trump Administration has also ordered a freeze on all new federal contracts (the bulk of PRIA application review is performed under contract).

In its February 14th letter to EPA, CPDA cited a provision in the Priebus memorandum which specifically excludes from its mandate those regulatory actions subject to statutory deadlines.  CPDA explained that the primary benefit of the statutorily established review timelines under PRIA is to provide certainty and regulatory predictability while allowing for independent review of applications for product registrations.  CPDA emphasized that the delay in publication of registration approval in the Federal Register nullifies this benefit and creates a critical situation for the agricultural and pesticide manufacturing and distribution sectors whose businesses depend on the date-certain approval of products so that they are made available for use by farmers during the limited window of the spring growing season.  Any delay in making these products available to users, CPDA added, could have serious financial consequences not only for the pesticide industry but for farmers who depend on ready access to these crucial products in making their spring planting decisions.  CPDA will continue to keep a close eye on this situation and report on further developments as they occur.