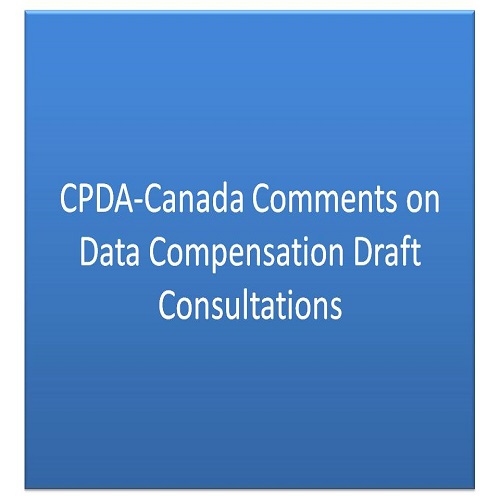 On February 24, 2017, CPDA-Canada submitted comments to Health Canada’s Pest Management Regulatory Agency (PMRA) in response to the Agency’s December 30, 2016 consultation document containing proposed revisions to the Agreement for Data Protection under Section 66 of the Pest Control Products Act (PCPA) formerly known as the Ministerial Agreement.  In its comments, CPDA-Canada expressed its disappointment with the changes proposed by PMRA emphasizing that the Agency “still refuses to implement an equitable data compensation and regulatory mechanism that balances the interests of companies that develop new pesticides (‘innovator’ companies) fairly with companies that produce generic pesticides (‘generic companies’).”

CPDA-Canada focused on the inequities inherent in the “Final Offer Settlement” (FOS) approach to arbitration maintained from the Ministerial Agreement by PMRA and recommended by the Intersol Group in its report to the Agency.  The mechanism set forth under PMRA’s consultation document on the new Agreement is essentially identical to the arbitration terms of the existing Ministerial Agreement.  Namely, an Arbitral Tribunal is required to choose either the generic company’s “willing-to-pay” final offer or the innovator company’s “willing-to-accept” final offer.  CPDA-Canada emphasized that the FOS approach is inappropriate for this type of arbitration and subjects the generic registrant to inordinate financial risk.  CPDA-Canada pointed out that there is no evidence that a single registered generic pesticide product was based on an arbitral award utilizing FOS arbitration under the existing Ministerial Agreement since 2010.  “Instead of addressing the fundamental cause of this limitation (a severely biased arbitration approach that eliminates the availability of important lower-priced agricultural products to Canadian growers), the Agency seems insistent on perpetuating the problem by maintaining this inequitable and unworkable form of arbitration,” CPDA-Canada stated.

In its comments, CPDA-Canada addressed the lack of provisions in the proposed Agreement that would confer upon the generic company the right to discovery during negotiations and arbitration.  CPDA-Canada emphasized that without the right to discovery, the generic company is effectively denied access to the type of information that is necessary in accurately assessing the likely profitability of commercializing the product, especially if the product in question is the first or second generic chemical to enter the marketplace.  As such, the generic company is put at a decided disadvantage in making a “willing-to-pay” final offer under the FOS arbitration approach.  Moreover, CPDA-Canada pointed out that the proposed Agreement could unfairly subject the generic company to stiff financial penalties in the form of reimbursement to the innovator company for legal costs and disbursements incurred during the arbitration proceedings.  This penalty would be applicable in situations where the generic company either withdraws from the arbitration proceedings and/or decides that it would not be economically feasible to move forward with the registration after an award is made.

CPDA-Canada called upon PMRA to remedy these impediments to the generic registration process by replacing the FOS approach with an unbounded binding arbitration mechanism (under the Canadian Arbitration Act or CAA) that would include the right to discovery and information sharing during negotiations.  CPDA-Canada further urged PMRA to allow the generic company to withdraw from the arbitration proceedings at any time before the award is made without fear of financial penalty and to require that arbitration costs be split between the parties with each party responsible for its own expenses.  In addition, CPDA-Canada recommended that the Agreement include timelines of 30 days for negotiations and 120 days for arbitration.  CPDA-Canada explained that particularly in situations where the product in question would be the first generic product to enter the marketplace, the innovator company is likely to delay negotiations in an effort to keep competing companies out of the market for as long as possible.  CPDA-Canada stated that there is no incentive for an innovator company to negotiate in a timely manner in such situations.  However, CPDA-Canada noted that in cases where the negotiations are progressing at a reasonable pace, the parties can mutually agree to extend the time.  The result could be a negotiated agreement and a letter of access (LOA) or a request to go to binding arbitration.  Lastly, CPDA-Canada recommended that the final offers by the party be shared with the other party when submitted to the Arbitral Tribunal.  To read the full version of the comments, please click here.

CPDA-Canada also submitted comments to PMRA in response to the Agency’s draft consultation document on the eligibility criteria for compensable protection status for foreign test data as proposed on December 30, 2016.  CPDA-Canada expressed its support for PMRA’s clarification of the compensation status of the foreign data the Agency considers during re-evaluations, special reviews, and the registration of generic products calling it “appropriate and needed.”  However, CPDA-Canada reiterated the need for PMRA to revise the negotiation and arbitration component of the current data compensation process so as to make it equitable.  “Unless the Agency does so,” CPDA-Canada emphasized, “the helpful clarifications of this current proposed action will remain irrelevant to achieving a ‘fair’ and ‘equitable’ data compensation process for timely registration of generic products based on newer chemistries.”  To read CPDA-Canada’s comments, please click here.

(To learn more about the draft consultations proposed by PMRA please visit our archived news item by clicking here).